Val Wood is a British author of historical romance novels. She has written over 20 novels, all set in and around the city of Kingston Upon Hull. Val kindly visited us at Castleford Library on Tuesday 17th October. It's not her first visit she came to the library about 10 ten years ago and promised to return.

Val was shown around the refurbished library and museum and had lunch with FOCAL members. To an audience of around 20 people Val reminisced of her early days as a Castleford lass and then told of her life pre and after her writing novels.

Once Upon a time...there was a dreaming child...How often have we all at some time begun to read or tell a story in such a way? I certainly have for as long as I can remember, and I was for sure a dreaming child in a make-believe world with a story in my head and a book in my hand.

I was born in Castleford in West Yorkshire and apart from a few years living in York as a very young child, I spent my formative years in that mining town. We lived, my mother and I and baby sister, with my Granny in her house. My father was in the army and my mother, like so many women, became the main breadwinner, by working in my uncle's grocer's shop in Castleford Market Hall. We never considered ourselves poor, because nobody had very much during the war years, but in Granny's terraced house in Glasshoughton, there was no electricity, only gas light and a candle to light my sister and me to bed. But there was always a good fire glowing in the kitchen range, another of my uncles was a miner and Granny was allowed a wagonload of coal. There was fresh homemade bread (I'm quite a good hand at bread making, just like my granny), and ham boiled in the copper...or set pot as it was called in the West Riding.

One of my earliest recollections was hearing the ring of the miners' clogs as they went up the hill for their early morning shift and then again a little later as those who had finished came down. There were no pithead baths then, and some of the men used to sit on their front steps in their blackened working clothes, smoking a rolled up cigarette whilst their wives filled the tin bath with hot water for their scrub down. I remember drinking Dandelion and Burdock in the school field which was just across from Granny's house, and sucking on the clover petals to extract the 'milk'. It was a normal ordinary childhood. My friends and I skipped or played hop scotch, we dressed up in our mothers' clothes and pretended we were film stars. Another sister was born, a girl from up the street died from diphtheria, and I went to the Cozy cinema at least once a week.

We spent our summer holidays at Scarborough staying at our other grandmother's house and renting a day chalet in the North Bay. With our Scarborough cousins we searched for crabs in the rock pools, climbed the hill to Scarborough Castle and danced at the Tea Dances in the Corner Café. A perfectly ordinary childhood, but which, on looking back with adult eyes, was really rather special.

We came to live in East Yorkshire when I was about thirteen. My father obtained work in Hull as a war damage surveyor and I can remember looking at the bombsites and the damaged buildings and wondered what had been there before. Perhaps that was the start of my interest in local history! I never liked school and I didn't do well, except in English. In my final term I won the English Prize, which was, appropriately, a book! After leaving school, having meanwhile trained as a professional mannequin (today they're called 'models'), I worked in Hull and area. I loved the glamour of it, the beautiful dresses, the ultra smart suits, the excitement of treading the catwalk. My great passion though, in my teenage years, was ballroom dancing, very much the vogue in the fifties and if I might say, quite modestly, I achieved some success competitively, as well as obtaining a clutch of medals!

But back to the story telling. It began, I suppose, even before I can remember, for my mother often told the tale that when I was small I had an imaginary friend and would sit on the stairs and talk to her. I do believe that a lot of children have imaginary friends, the difference is that they lose them or forget them once they get older, whereas I still have lots, all in my head, and these friends make up the characters in my novels!

I married Peter, a photo-lithographer, in 1958. He was about to embark on a successful career in the print industry and I was working as an optical secretary in Hull. We have two daughters and a grandson, and it was to these daughters that I again began.....Once upon a time... 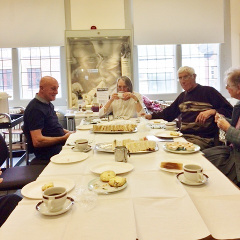 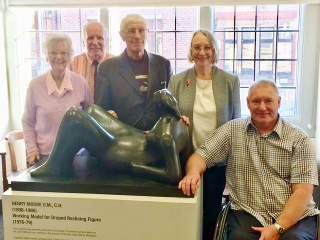