No 31
July 2012. Looking down the adjoining thoroughfare and a close-up that shows how the new build abuts the old library.

No 33
All three floors of the new building are in situ.

No 34
August 2012. An internal photograph showing the new floor with the lift shaft in orange.

No 35
An internal photograph of the new floor looking north with the stairwell on the left. 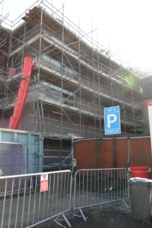 No 36
October 2012. The exterior of the building being clad in brick and the stairwell windows are in situ. 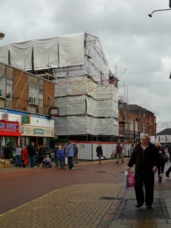 No 37
November 2012. The whole of the old library covered over while replacing the roof with new slates. 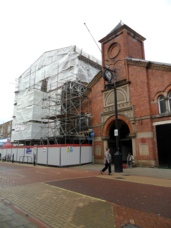 No 38
November 2012. Looking up Carlton Street, the old library encased, next to the old market hall. 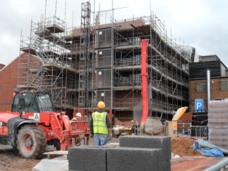 No 39
November 2012. The brickwork is almost complete.

No 40
January 2013. Scaffolding down reveals the new extension shell complete. Rear windows waiting to be inserted.