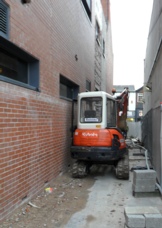 No 41
January 2013. A side view of the new building looking down the thoroughfare to Carlton Street. 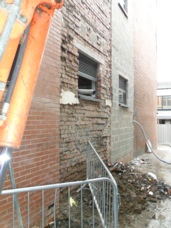 No 42
January 2013. The side of the new building where rendering is to be applied. 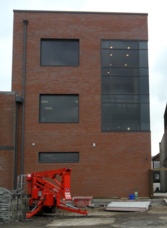 No 43
March 2013. All building work complete and scaffolding down. The site is being cleared as builders leave. 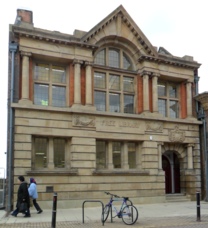 No 44
March 2013, The frontage has been restored, cleaned and new glazing added. The building is awaiting a new access ramp to be built.

No 45
March 2013. Looking at the new childrens' library on the ground floor before fit-out begins.

No 46
March 2013. Looking from rear of second floor at the new lift and museum space.

No 47
March 2013. A view looking towards Carlton Street, showing the new refurbished local studies area of the first floor.

No 48
March 2013. Ground floor looking at the newly exposed and refurbished cabinets, which have been covered over for over 30 years. 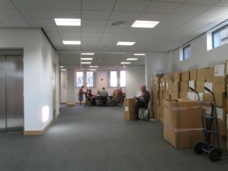 No 50
September 2013. Installation of the Chariot display on the museum floor.

No 51
September 2013. Childrens' library on ground floor starting to install books and equipment.

No 52
September 2013. New work station and book shelves fitted on the ground floor.